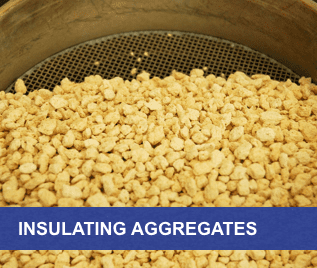 Loose Fill.
For insulating irregular spaces where other types of refractories are difficult to use.

Economical.
Can be combined with shipments of other materials from the Zelienople plant to reduce freight charges. Installation as loose fill is quick – reducing labor costs versus other refractories.

The first two numbers in the following Blazelite aggregates designations refer to the refractories or heat resistance of the aggregate. The second two numbers refer to the approximate density of the slab. An LI designation means it low in impurities of ferric oxide and titania. The LI designated aggregates are suitable for use in reducing atmospheres when combined with low iron calcium aluminate cements.
Blazelite Aggregates

2337 LI.
Can be combined with portland cement or calcium aluminate cements to produce a low-density, low-temperature insulating castable for 2300°F service or below.

2653 LI.
A high purity material for temperatures of 2400 to 2600°F, used extensively for low-iron insulating castables.

2861 LI.
An alternate to 2855 LI, it is used when a higher strength insulating castable is desired.

BNZ Materials warrants that its products are manufactured in accordance with its applicable material specifications and are free from defects in workmanship and materials using BNZ’s specifications as a standard. Every claim under this warranty shall be deemed waived unless in writing and received by BNZ within thirty (30) days of the date the defect was discovered and within one (1) year of the date of the shipment of the product
Toggle Sliding Bar Area